Pennsylvania saw a 38% increase in the rate of gun violence during the first year of the COVID-19 Pandemic compared to the pre-pandemic period. This rate was higher than that of the national average — the rate increased by 30% in the entire United States (US). This observation is based on the recent peer-reviewed study that enabled us to assess the rates of gun violence before the COVID-19 pandemic and compare them with the rates during the first year of the pandemic. For example, March 2020 was Philadelphia's worst March for gun violence in 5 years. Although the factors responsible for the observed rise in gun violence are many and complex, increased access to firearms is one of them. In the first months of the pandemic, gun sales in the United States surged , yet it is well-established that access to firearms is a major risk factor for gun-related suicide and homicide .

In the spring of 2020, during the first pandemic wave, Penn State Health Milton S. Hershey Medical Center experienced a surge in the number of hospitalized COVID-19 patients, subsequently increasing the utilization of health care resources such as blood products and intensive care beds, personal protective equipment, and hospital staff. At the same time, we observed an increased number of trauma patients with gunshot wounds. We theorized that rising gun violence rates would further strain health care resources already exhausted by COVID-19 patients. For these reasons, a team of surgeons, public health specialists, and physicians with expertise in public health issues decided to conduct a study comparing the rates of gun violence events in the US as a whole and each state, from pre-pandemic and pandemic periods.

How the analyses were conducted

We normalized the gun violence events by the number of people living in each state. In the modeling approach, we also added other factors that could influence gun violence rates and the number of COVID-19 cases. These added factors were based on US census data (each state’s median age, Black-White ratio, Hispanic-White ratio, and male-female ratio) and whether the state was under stay-at-home orders. We used a time series modeling approach that uses time as a determinant factor of the outcome. Our data set consisted of daily counts of gun violence events within 50 states and the District of Columbia from January 01, 2019 through March 31, 2021. We combined the daily data from these 27 months into bi-monthly intervals (January 1, 2019 through January 15, 2019; January 16, 2019 through January 31, 2019; etc.), which yielded 54 time intervals. The statistical modeling accounted for the variability in numbers across the time periods.

The findings from our study revealed that in the first year of the pandemic, the rate of gun violence in the US shot up by more than 30% compared with the same time pre-pandemic; 28 states, experienced significant increases in year one of the COVID-19 pandemic ( Fig 1 and 2). In Pennsylvania, the rate of gun violence during year one increased by nearly 40%. We were not surprised that gun violence rates were higher during the pandemic, but we were surprised by the significant increase. In addition to Pennsylvania, gun violence rates during the pandemic were substantially higher in Arizona, California, Colorado, Connecticut, Delaware, District of Columbia, Georgia, Idaho, Illinois, Indiana, Iowa, Kentucky, Louisiana, Michigan, Minnesota, Missouri, Montana, Nevada, New Jersey, New York, North Carolina, Ohio, Oregon, Tennessee, Texas, Utah, and Wisconsin. In some states such as Minnesota, Michigan, and New York, the rate of gun violence shot up by 100% during the first year of the pandemic.

Although our study was not framed to explore the mechanisms and specific risk factors that caused the increased rate of gun violence, the COVID-19 pandemic has been associated with psychological distress caused by the shelter-in-place orders , increased rates of domestic violence, disruption of social networks , unemployment , and record increases in gun sales and access to guns during the pandemic . All these factors are plausible reasons for the observed increase. Our results reinforce the need to promote multiple interventions — vaccinations, testing and contact tracing, masking, ventilation — to mitigate the COVID-19 pandemic, and in doing so, hopefully, we can minimize the downstream effects described above.

Our current study focused on the increased rates of gun violence in the US as a whole and for each state. We, however, did not explore the mechanisms and factors responsible for this rise in gun violence. Therefore, additional research is needed to highlight factors that drive gun violence rates during the pandemic. Furthermore, we did not disaggregate homicide from suicide rates. Due to the ongoing police investigations, we were advised by the Gun Violence Archives to avoid reporting the outcome of gun violence by suicide and homicide.

Where do we go from here?

We plan to extend this work to explore the rates of gun violence in Pennsylvania and the rest of the US in the second year of the pandemic and beyond. Additionally, it would be interesting for future studies to determine if the observed gun violence rates in the US during the pandemic are similar or different from the rest of the world. Lastly, future studies should investigate the rates of gun violence categorized by either suicide or homicide.

Figure 1: State-specific intensity of gun violence during and before the pandemic.

Figure 2: Spatial relative risk of gun violence during the pandemic vs. pre-pandemic. 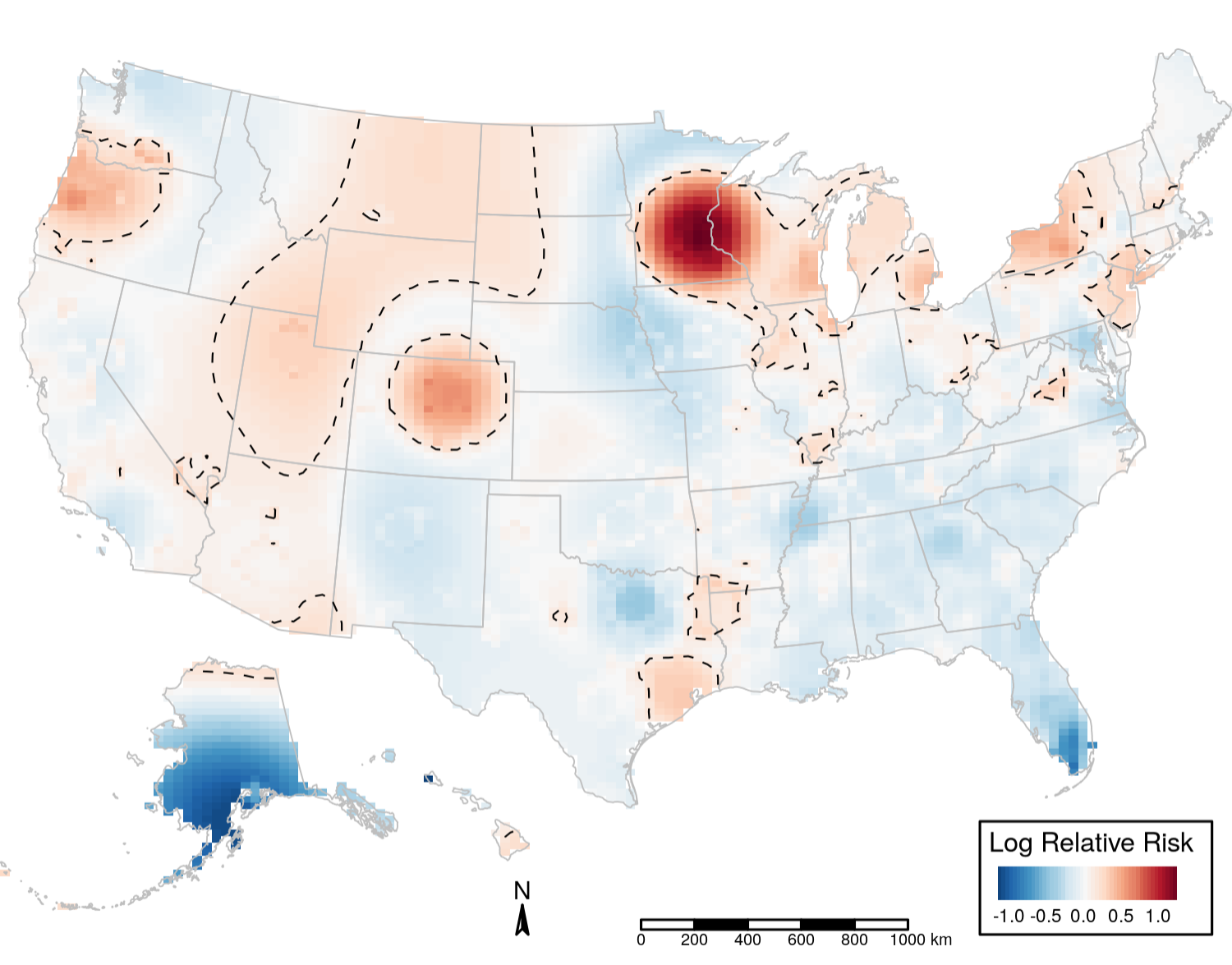